The birth of an idea - thoughts are real! 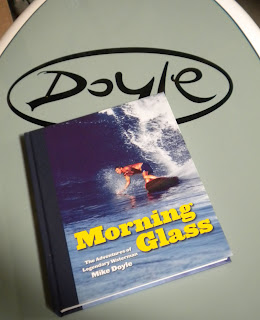 "A good story never gets old" This has been the response to my book since it was first published. I have had a lot of mail: "Your book has changed my life" "My wife never understood why I like the ocean until I had her read Morning Glass, thank you" "Mike, I was a lawyer and did a little shady business deal and was disbarred. My wife was disgusted with me and I was with myself. I read your book and I started surfing again. My wife went: “great turn into a surfing bum on top of it all.” Well I surfed every day and I cured myself and got healthy of mind and body. I am getting my life straight and my license to practice law again. Thanks so much" One church was using quotes from my book on the pulpit. Another high school had it on their English literature reading list. Wow. this is big stuff and it makes you feel good about all the time spent putting the book together. It's not a money maker unless you do mega volume like John Grisham but the fan mail makes you think it's worthwhile.
Along the way I got a lot of comments, "Why don't you make a movie…Morning Glass?" so I started moving that direction in 2004 after the hard copy came out. I got together with Steve Sorensen again to write a script. I had the script in my mind thinking Hollywood loves sex, drugs and rock and roll , so I was having lots of that in the script. Steve, my writer wouldn't have anything to do with it. He wanted to keep to the book and make it pure and simple, "A boy's love for the ocean changes his life and the lives of others" So we wrote the script around the book. I think I sent that script to a couple of hundred people that are related to the movie industry. From Brian Graizer to anybody that knew anybody. It didn't seem to be working and the comments were; "I think you should do a documentary not a movie" "The script reads like a documentary not a movie." Of course I am thinking; I knew Hollywood would want more sex , drugs, and rock and roll…
I met Rob Woodburn in La Jolla at the Jet Set modeling agency. He was very receptive to the project and also agreed that it should be documentary. Then he up and moved to Australia for a good job offer. My hopes were dashed again. He really got the message and thought if handled correctly, it could really be a moving inspirational movie that could reach the heart of surfers and non-surfers alike.
Over the next five years I corresponded and Rob never lost the focus of what Moring Glass could become as a documentary. I sent him more books and kept the file open. Then last year he sent down Josh Waller, a young film maker who was thrilled by the book and its feeling. We have been meeting and working together between Baja and San Diego. He is a artist in the true sense,(He won't tell me what he is doing) so I just go with the flow. Just about the time I think I will never hear from him again, he calls and says the teaser trailer is done. Wow. take a look at this! What a good start. Josh really has a grip on what we are trying to get across, something everyone can relate to, the feeling of going with your heart. give everything to your gut feelings. Bigger than surfing. I am happy to share this trailer of Morning Glass, another step closer to the finished product. Thanks Steve. Thanks Rob and Thanks Josh, what a team!
Mike Doyle
See the trailer: Morning Glass Trailer
password: doyle
Posted by Mike Doyle at 2:31 PM 2 comments:

I started helping rough shape Balsa boards for Velzy and Jacobs in 1958, in their  shop. I was also shaping in my garage for Dave Sweet (first foam blanks) about 15 boards a week and building my own boards with my label at the same time. When I graduated from High School in ‘59 I went straight to  to live my dream. I met Don Hansen there and we discussed opening the first surfboard shop in North County San Diego. He would be the owner and money guy and I would be the Hot name surfer shaper. His bankroll was $15,000. I shaped for Hansen about 6 years mostly making my own Mike Doyle signature model and designing some of his line like the first short board called the 50/50 designed by Mike Doyle. I shaped about 5 boards a day so it added up to several thousand boards over my career which still is not over. In 1970 I came out with the first soft-board with Tom Morey. It was a real hit and the beginning of surf schools. I remember we made 3000 soft boards in one year. Nobody even considered us in the surfboard business yet we were making more boards than anyone in the business but they still thought of them as gimmiks,toys etc. We laughed all the way to the bank. Shaping and riding your own equipment is a fantastic feeling. What other sport can you do that? Every curve, rocker shape and fin combos make the board react different. Now I am just shaping a few boards for my wife and friends and prototypes to be sent to  to be hand copied. You don't lose your touch with age in fact you get better. In 2009 I received the coveted award... I was inducted into the Surfboard builders Hall of Fame. Quite an honor.
-Mike 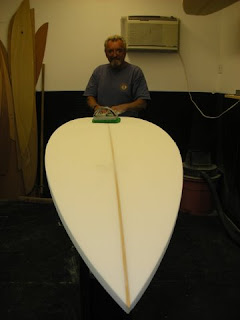 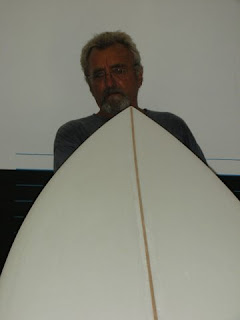 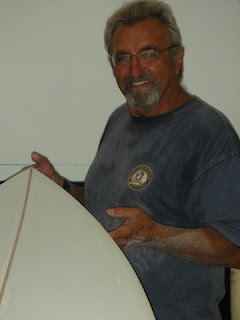 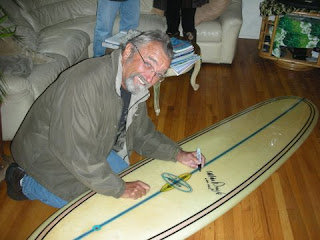 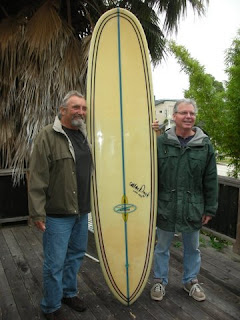 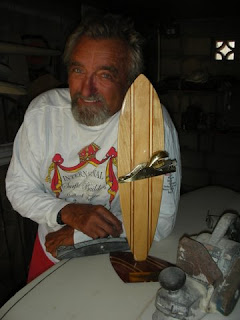 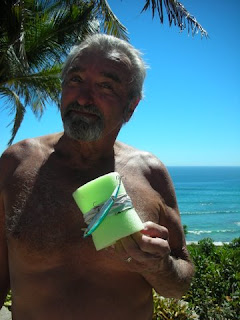 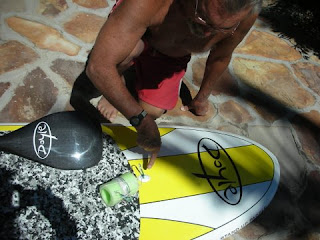 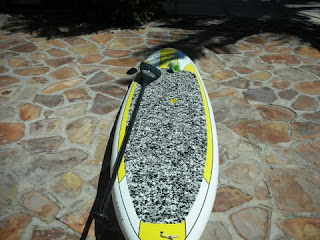 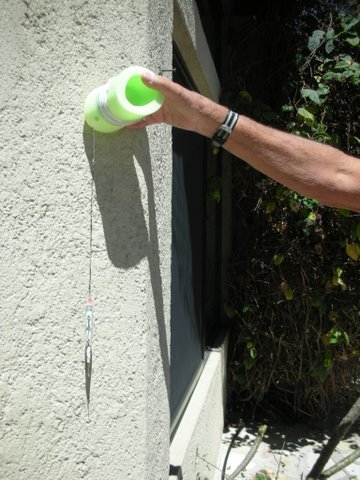 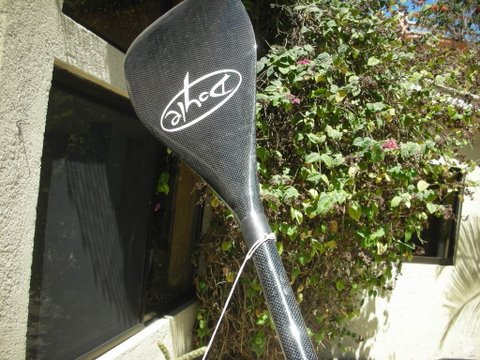 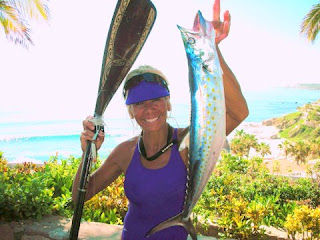 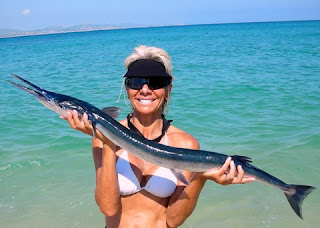 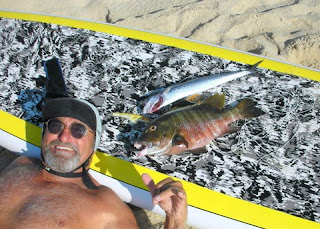 This gear is made for clean water, with no kelp or ell grass, Bahamas, Florida , Hawaii Cabo, Cancun and other clear water places. The first pic. is the whole enchilada wrapped around a piece of foam. Thats 25 feet of kiteboarding string or 100lbs test monofiliment. 20 feet of 50lbs monofiliment. 8 inches of 45 lbs steel leader and then the lure, a jointed Repala. The jointed repala is the best since it gets better action at such low speeds. It's hard to set a hook into the fish at such low speeds so I attatched the line directely to the paddle so you usually hook the fish on the recovery part of the stroke and the recovery part is when the lure really get some good swimming action. Thats a stick on leash plug that I put ahead of the pad I am pointing to, I use that string to tie my catch on and also to tie the rig to when going out through the surf. You wanna keep those hooks away from the body. You have to paddle on one side and then pass the paddle over your head to the other side or else the string will get caught on your body. You get used to it after awhile. A basic slip knot is the best for attaching the string to the paddle. It makes paddleing less tedious when you fishing because you never know what might hit it. Once I got pulled off the board and pulled throught the water of 100 feet before the line snapped. Thats why you want the 50lbs test so it will break if you get a 100 lbs of Roosterfish and believe me it can happen.  This method will also work great in Lake Tahoe and other clean water lakes. But they won't need the steel leader at the end of the line because trout and bass don't have the gnarly teeth that these salt water fish have.  Most of all our fishing is right along the beach but this year we are moving out for Dorado and Tuna, keep ya posted.
Mike
Posted by Mike Doyle at 1:35 PM No comments:

My wife Annie and I just got back from Aspen . We do a type of snowboarding thats called carving. You use hard boots and a narrow snowboard and your feet mounted almost straight ahead. The idea is to lay over on the turn so the body is almost touching the ground and you never want to slide the tail of the board.. You can feel the G's as you pull into a turn. It's just like surfing and alot like supping. You can see in the video on Vimeo call Chasing Doyle,,,that you use your hand in the turn just like you use the paddle for support and a pivot point. It's a fantastic feeling and you need about a 10 foot wave to get the same feeling plus you get about 100 turns per run. Check out the video http://vimeo.com/19948823
-Mike 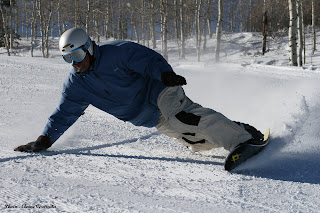 Posted by Mike Doyle at 3:39 PM No comments: